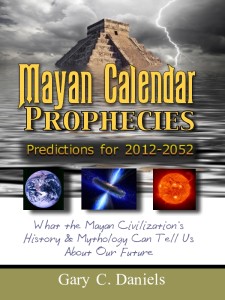 Mayan Calendar Prophecies takes a look at the science behind the Mayan calendar, prophecies and mythology. The Maya believed multiple cycles governed civilization. They created various calendars to track these cycles. Their short count calendar tracked a 256-year cycle believed to control epidemics, famines, warfare and more. Scientists have found a 250-year solar cycle that also appears to affect epidemics, famines, warfare and more. Their long count calendar tracked a 5000-year cycle related to natural disasters and cosmic catastrophes. Scientists have also discovered that the Earth is subjected to periodic bombardment by comets, asteroids, and other space debris that plunges the world into long periods of darkness and cold. Mayan mythology appears to record such events and in some instances even the exact dates on which these catastrophes occurred in the past. By comparing these dates with evidence from multiple scientific disciplines including ice core records, sedimentary records, and climate records, Mayan Calendar Prophecies unveils the truth about civilization’s darkest days. And what may lie ahead in the future. Buy Now.